Love being able to use your favorite fabric for handmade bias tape, but hate all of the work involved in pre-ironing? Mie of the Sewing Rabbit Team has some tricks up her sleeve when it comes to that, and is showing off 2 separate ways to make handmade bias tape! Both without the pre-sewing involved.  Her quick tips will have you sewing on handmade bias tape in a jiffy.

How to make and sew handmade bias tape, the fast way. 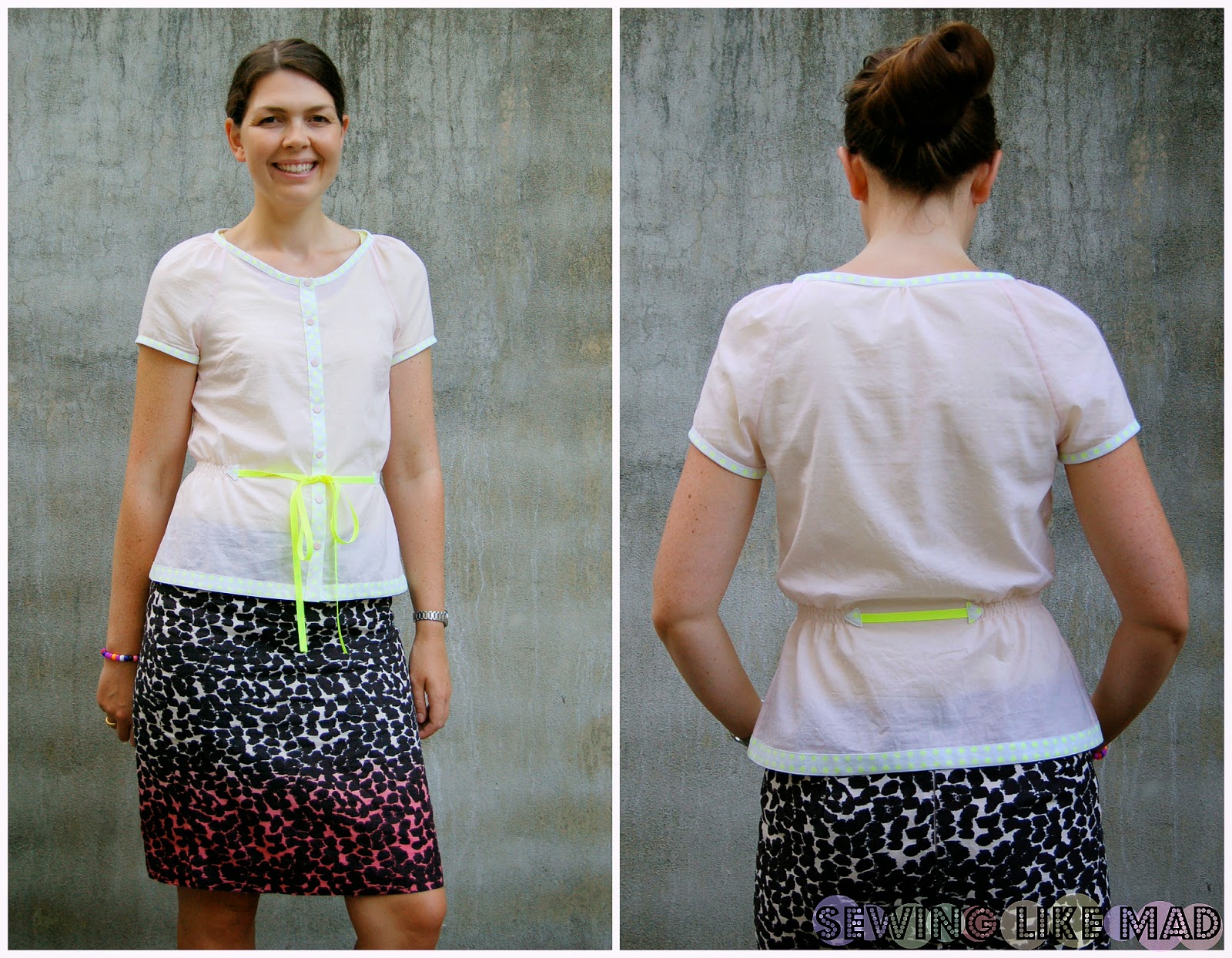 I got inspired to tell you about this no pre-iron bias tape-technique a day when I saw Hayley from Welcome to The Mouse House posting a status on her Facebook page saying that she just spend two hours making bias tape….and I thought hmmmm, Hayley is an absolutely AMAZING seamstress so if she does not know about this techniques maybe there are others out there who does not know about it either. (Hayley I hope you take this as an compliment – that is for sure what it is meant as – none of us know it all, right!!!). Let me show you my bias tape techniques…

Before starting to cut you need to decide what width you want your FINISHED bias tape.
On this shirt I decided to have a 1 cm  (3/8 in.) width. So to determine how wide you cut your bias tape first you multiply your finished width with 4 (a bias tape ends up being folded four times, right) but because all that folding also takes some width away I add another like 0.5 cm (3/12 in.). That always seems to do the trick.
A general algebra would look like this for users of centimeters:
(F.W.* x 4) + 0.5 cm = Cut bias tape this width
In inches:
(F.W.* x 4) + 3/12 in = Cut bias tape this width
*Finished Width of bias tape on your garment.
But after they are cut you are ready to sew them on your garment. Below is the tutorial. Since I was working with a garment with gatherings it was necessary to make a pattern for the neck bias tape since the bias tape would be the finished length of the neck line. I also originally planned on gatherings at the sleeve openings but skipped it along the design process – but since I already made the pattern piece for the bias tape I just decided to keep it even though is was not necessary. 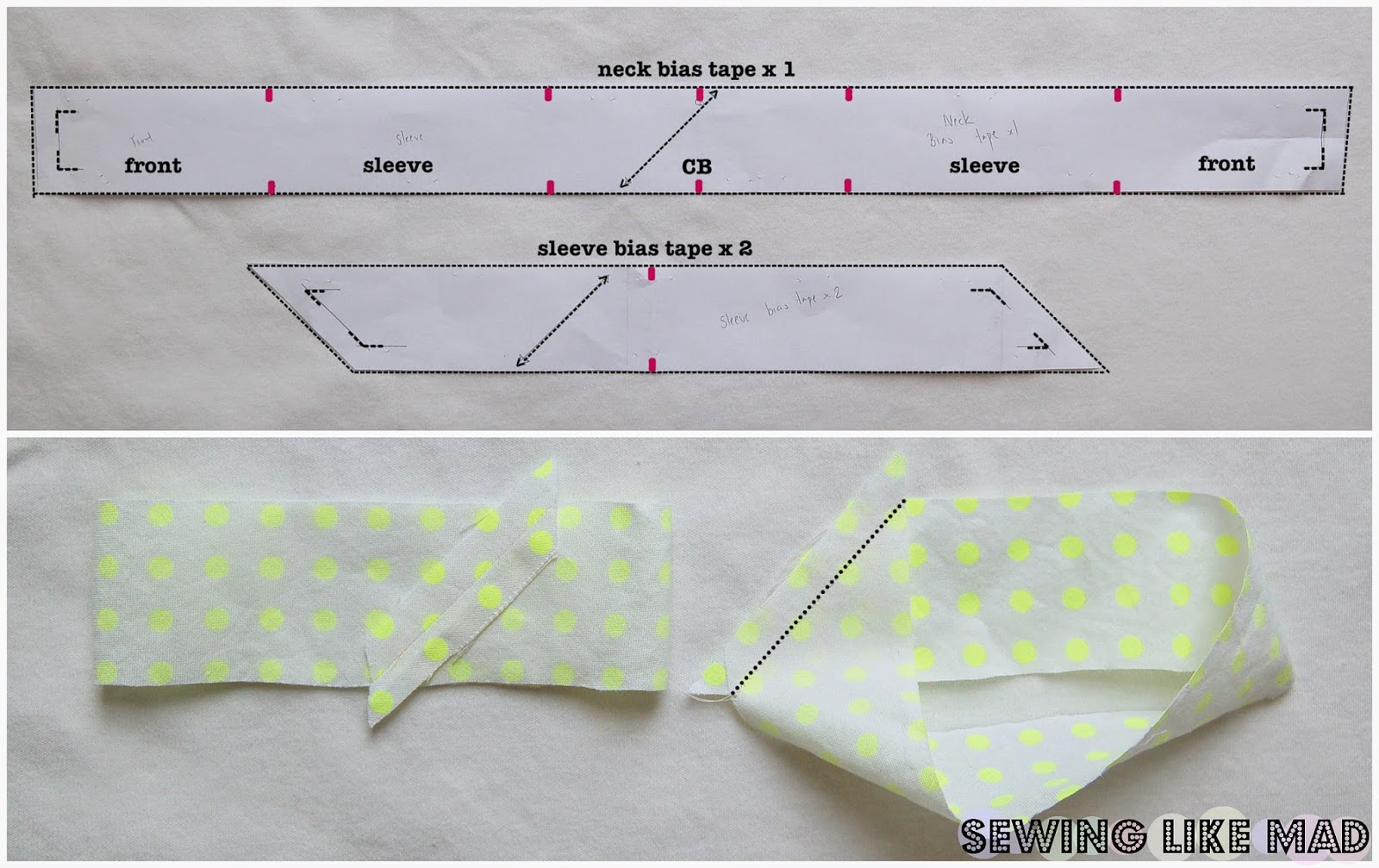 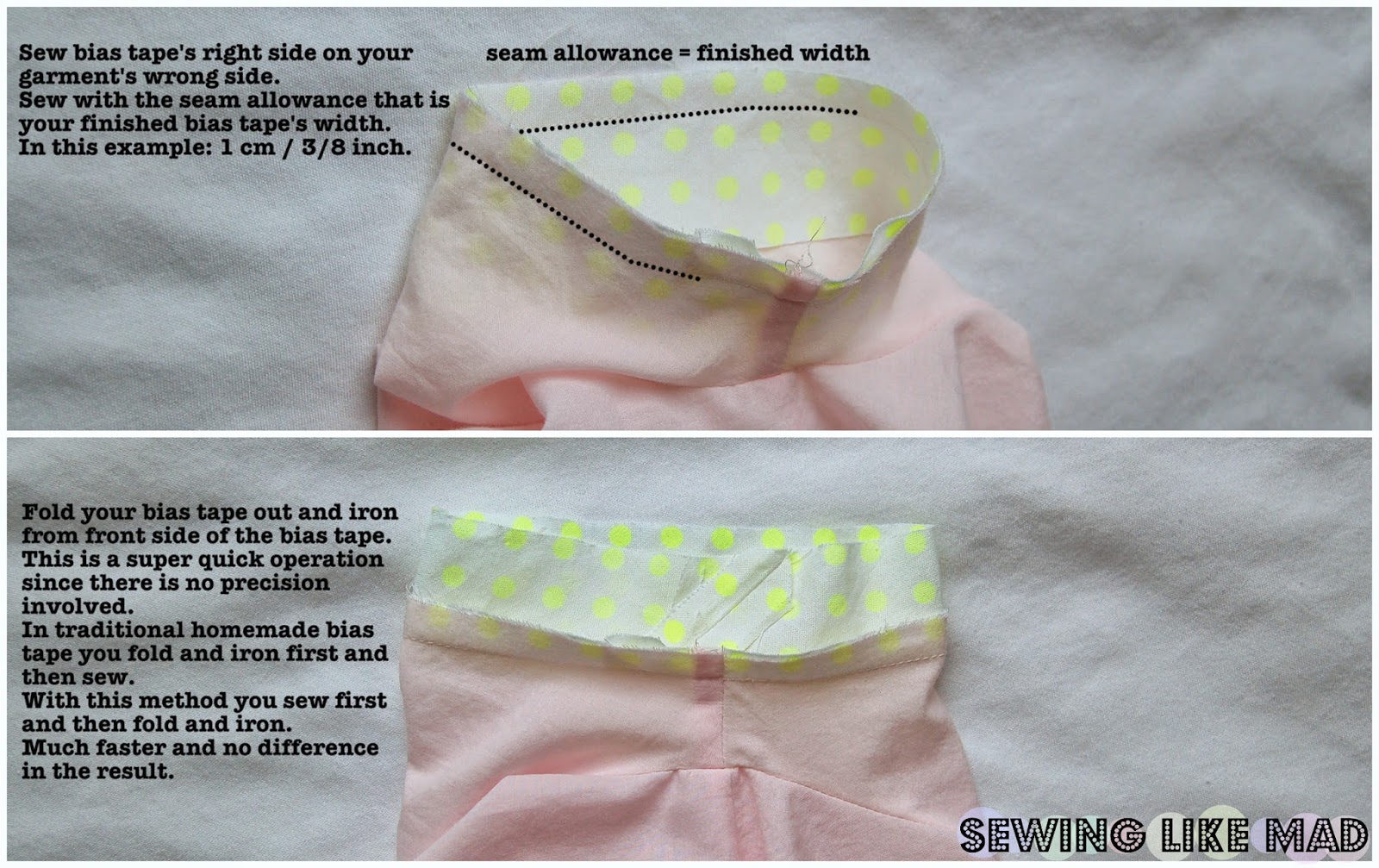 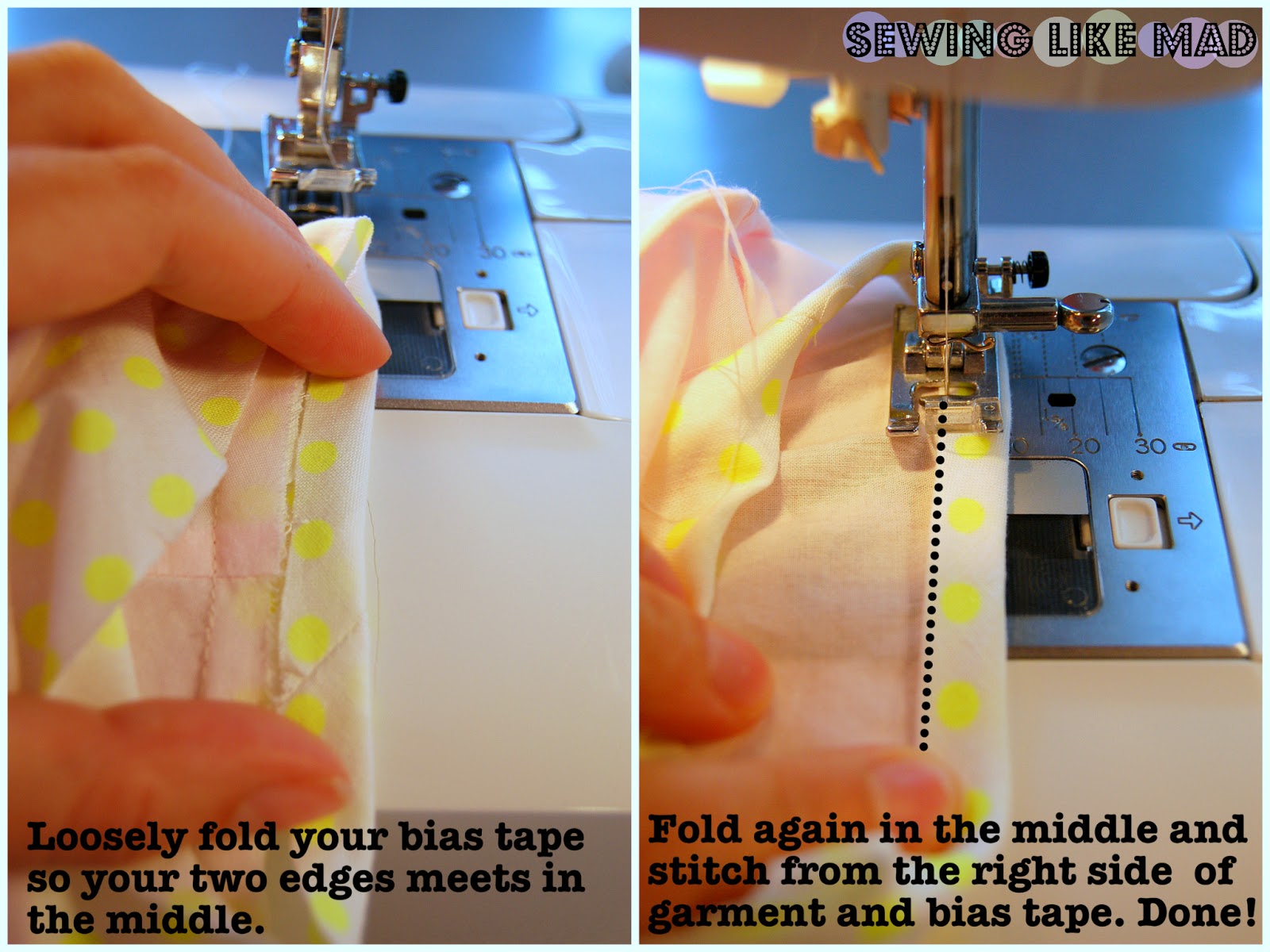 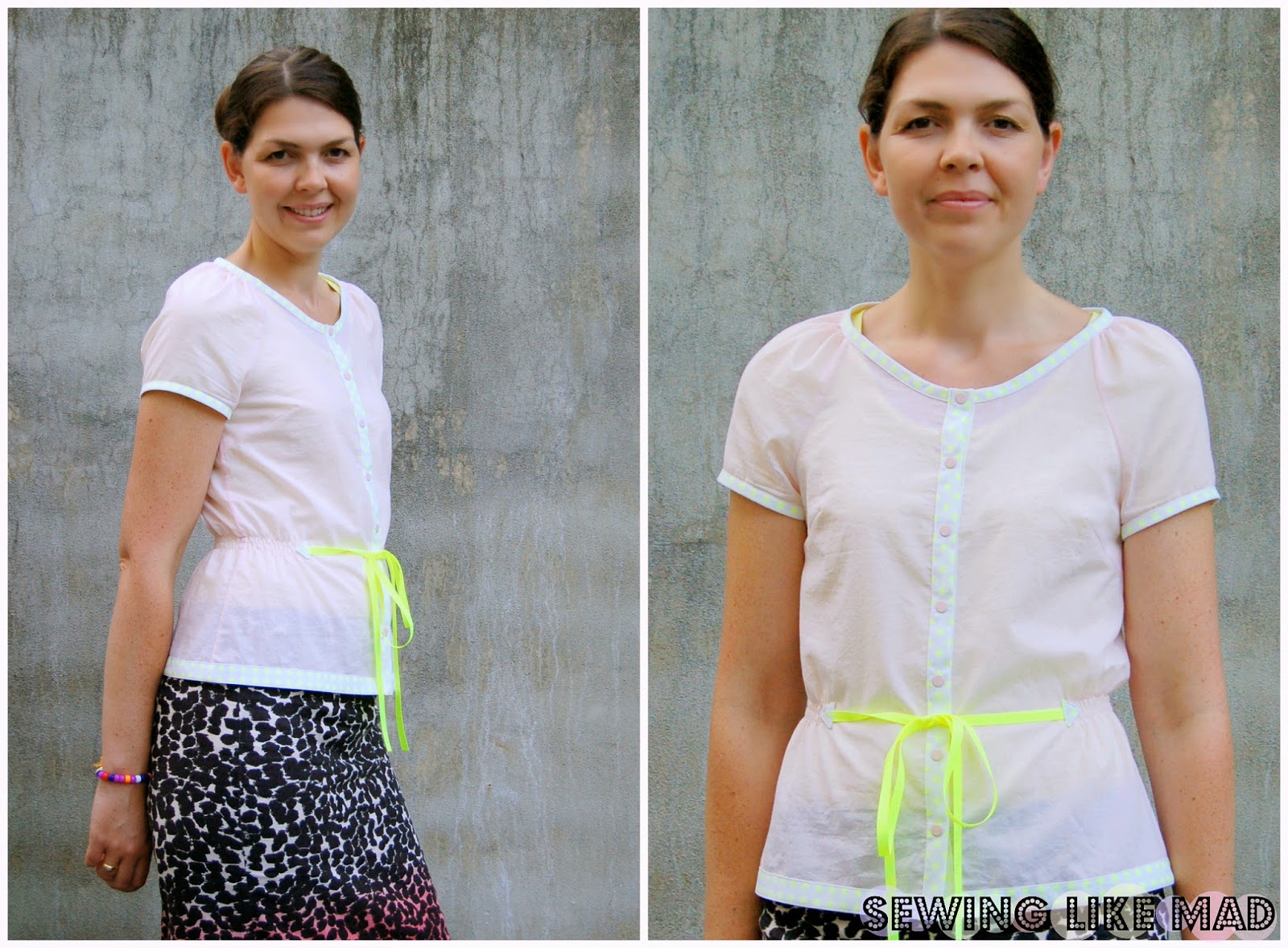 Before I show you the other tutorial for the bias tape hem I just want to go through this top at bit more. The neckline is gathered only at the sleeves and a tiny bit at center back and has a placket center front with snaps. It is made with this ultra light baby pink cotton voile and for the bias tapes and plackets I used this cool cotton yellow neon dot from Michael Miller. Another great buy from Fabric Weekend LA at Michael Levine. The ribbon is gross grain.

Okay, who is ready for another tutorial? Yay! This one shows you how to hem garments with a wide bias tape. This technique can be used both on the outside of the garment to make a visible band or on the inside instead of either a facing or for a more luxurious alternative to the usual fold and stitch hem.

To determine the width to cut your bias tape is super simple on this one. 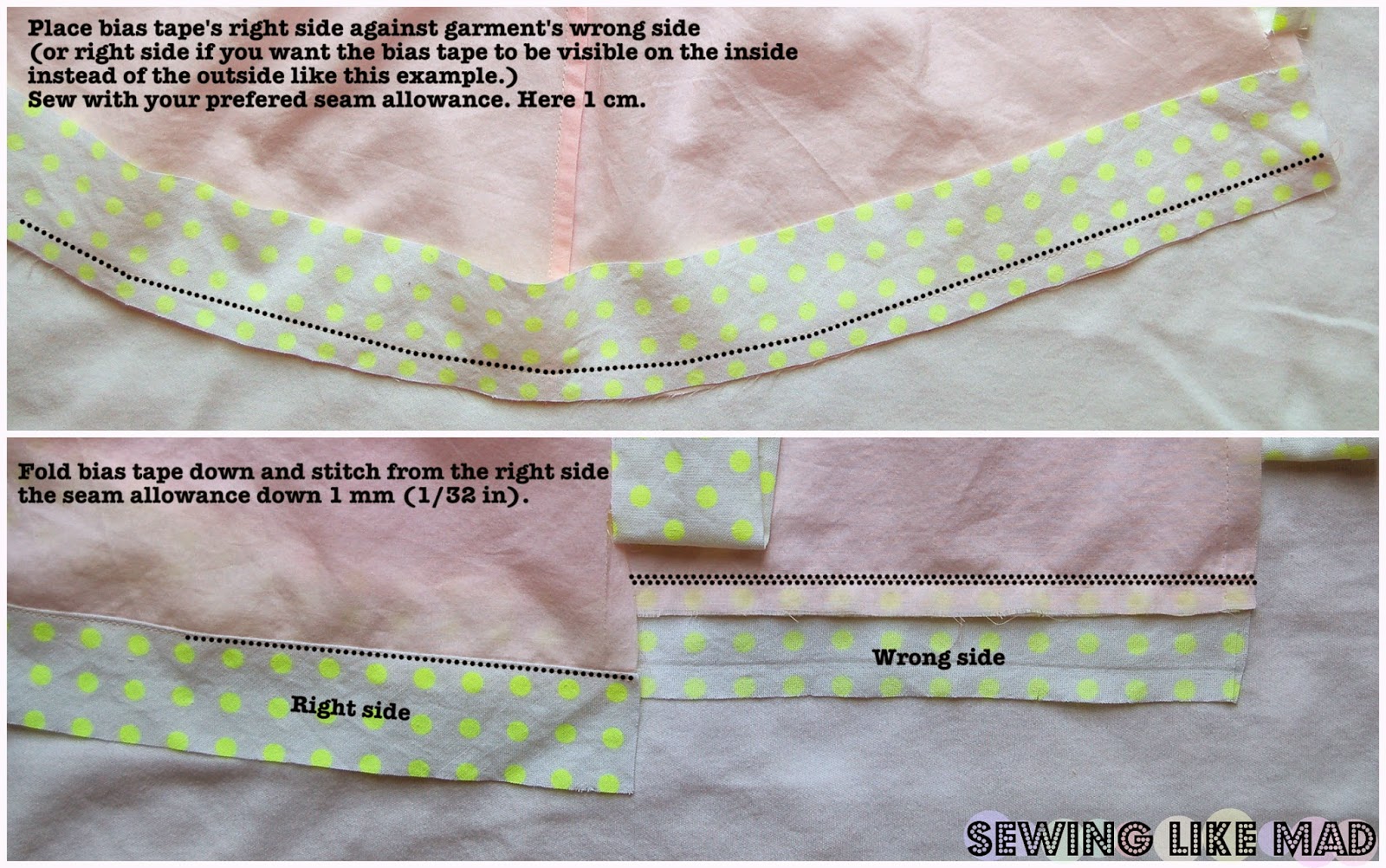 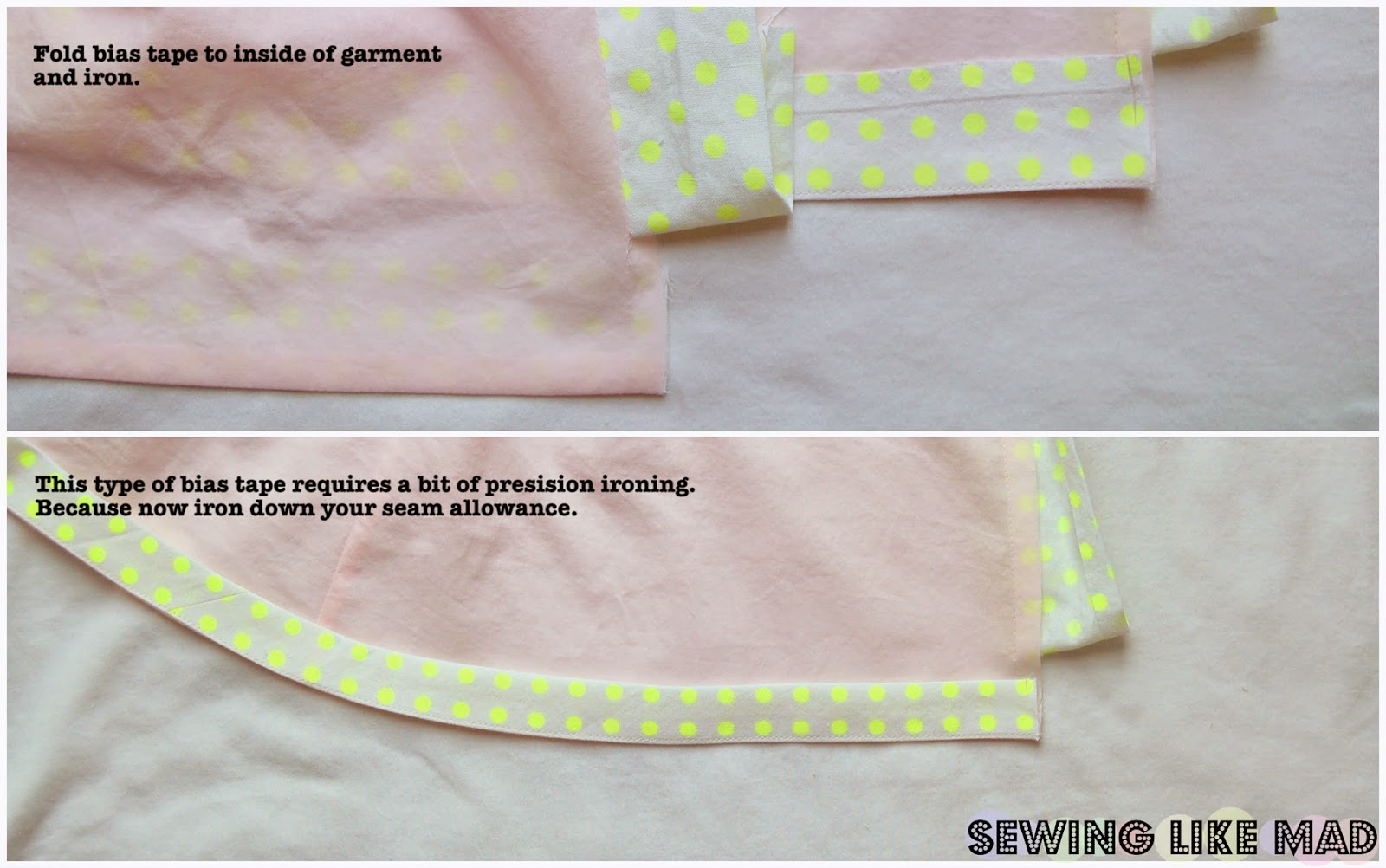 Last I want to show you some more close up photos of the shirring / belt combination. 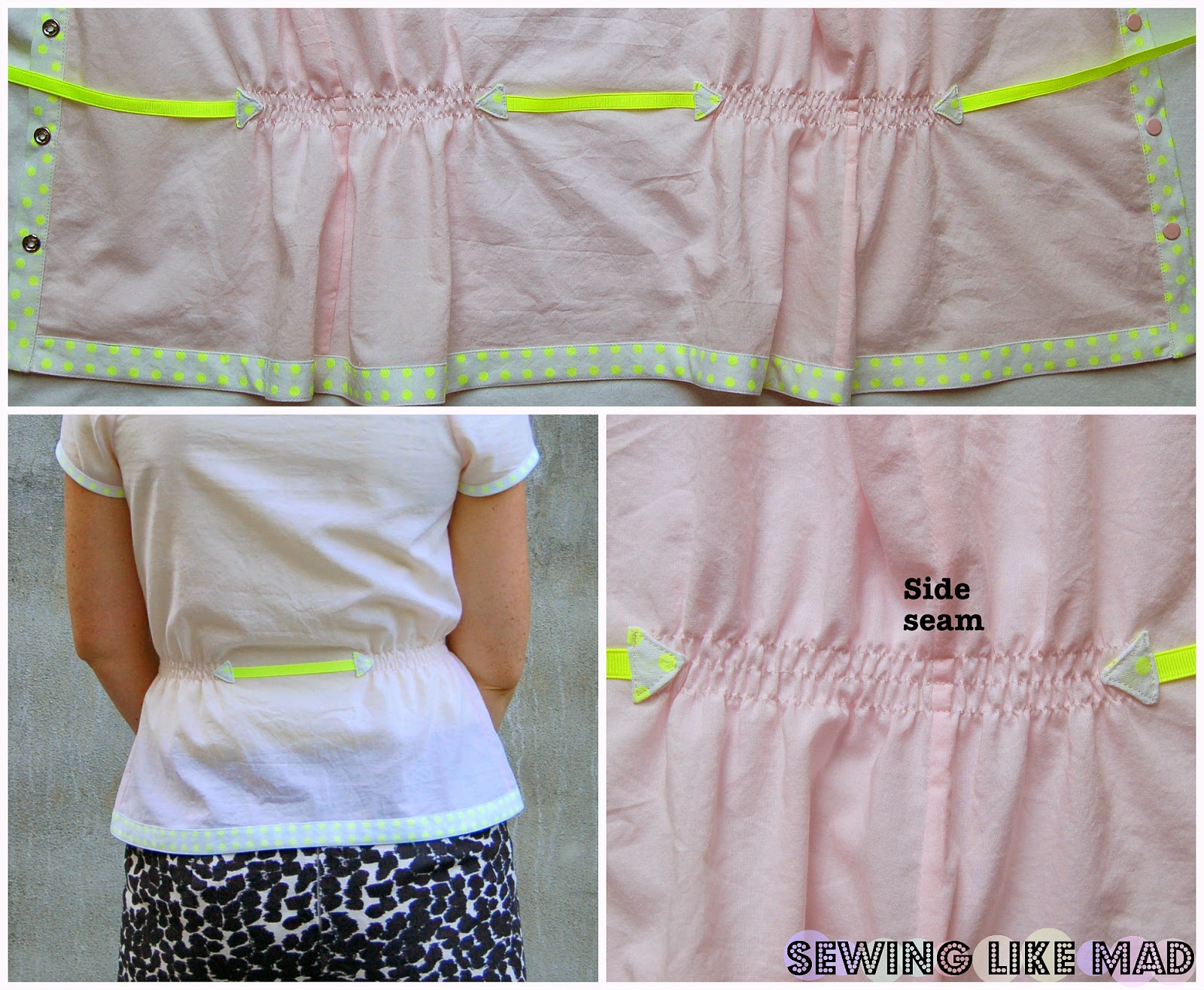 It honestly just happened a bit by coincidence. With my body type (narrow waist and wide hips/thighs) I know that accentuating my waist looks best on me.

When drafting patterns you can use several methods to do that and my first idea was simply to add front and back vertical darts but discarded the idea because I think it can give a bit of a formal look that I did not want for this top.

Another option is shirring. Now I was a bit worried about adding shirring all the way around the waist since the top has a placket and buttons. I was simply worried that the shirring would pull the two plackets apart – and an exposed belly button was not the look I was going for either. And well that’s how I came to the idea of only adding shirring in the sides of the waistline. And when that was done…well, I am not even sure how the idea of making those little triangles and adding the gross grain ribbon came but I am happy with the result.

I did not make a tutorial for it because well there is really no secret to it. What you see is how you do it. Three rows of shirring, sew and place the triangles and add the gross grain ribbon before you sew on the triangles. I will be happy to answer any further questions if this is not clear.

Thanks so much for stopping by, and until next time…