After months of preparation and excitement, this past Friday night 20 bloggers who share a passion for sewing and creating were able to get together for the Jo-Ann Fabric and Craft Stores Girl’s Night Out! It was an event we all looked forward to, a chance to finally put faces to names. To share our passions, to laugh and to truly connect on a personal level with one another. 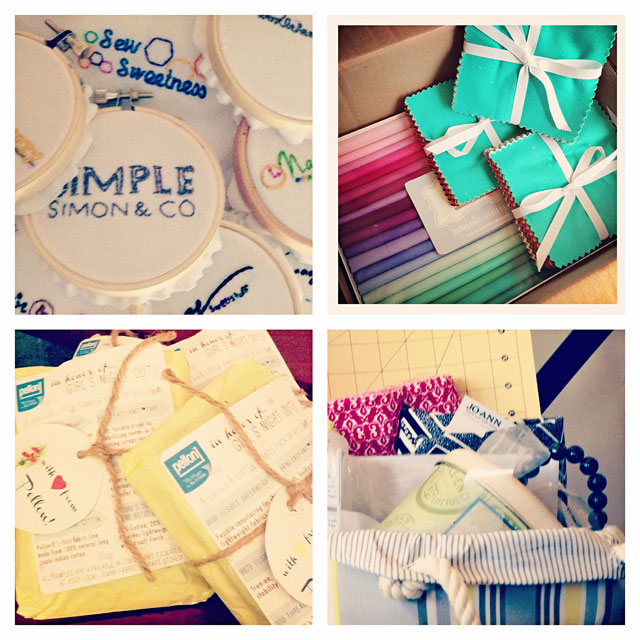 Loads of preparation went into planning and hosting this event. I really wanted to make it special for all in attendance.

With some incredible sponsors on board for the dinner including Jo-Ann Fabric & Craft Stores, Pellon, Michael Miller Fabrics, Coats & Clark, Fat Quarter Shop, and the Ribbon Retreat we were off to a great start.

I wanted each lady in attendance to know just how much they are appreciated. By not only me, but the entire sewing community.  Considering it was a sewing related dinner, I knew they would each appreciate something hand-made from the heart. So I hand embroidered each attendee’s logo in a 3″ hoop, knowing that this was something they could use on one of their own products in the future. Furthermore, I decided to sew each lady a tote she could take home with her. With these products in hand, I was off to Utah.

Upon arriving at Summer of Sumo’s Sweet Stuff‘s house, I was awed into silence. The Sponsors went above and beyond anything I could possibly imagine.  Her entire kitchen was overflowing with boxes. I felt just so very thankful. We opened box after box of sewing products – it absolutely blew me away.  Summer and I dutifully went to work to put together all of the bags, which ended up filled to the brim! 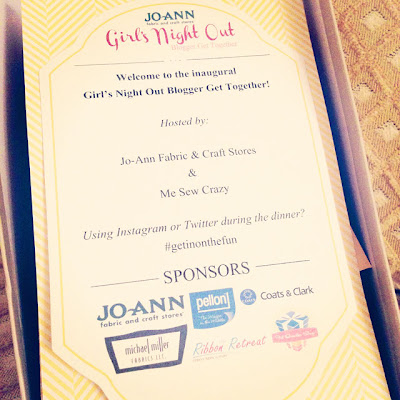 We arrived to the restaurant with 4 of us having overflowing arms of goodies, and got to work putting the Thank You cards on each plate, bags in each seat, and tent cards on all of the tables.

For those of you in the Salt Lake area – let me be the first to tell you – Pallet Restaurant was absolutely fabulous! We prepared a special menu that included amazing appetizers, dinners and deserts – and absolutely everything I put into my mouth was scrumptious. I almost asked for a second cobbler – ha!

As the ladies started arriving, the real fun began! Oh my goodness – I cannot even begin to tell you what it is like to meet a long-time friend in person for the first time. It is so exciting! The ones I thought I would definitely know the second they walked in the door, I was clueless. And then there were friends that I knew immediately. The hugs were plentiful and the laughter was great. I don’t think my smile left my face the entire night!!! 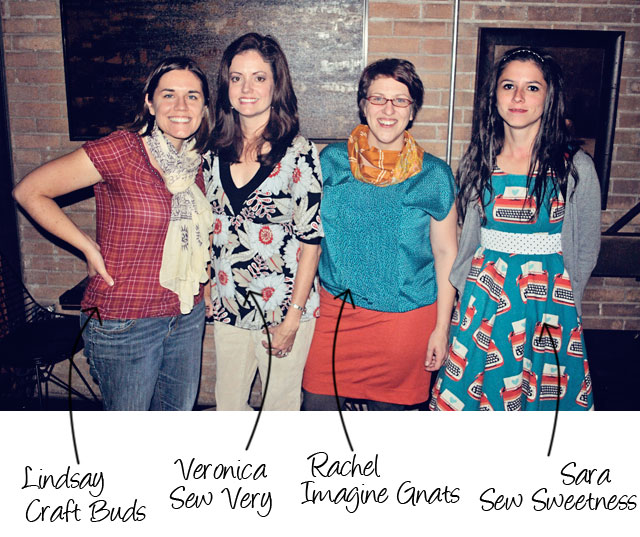 We began the night with special surprises for each guest. Attached to each thank you card was an envelope, and included in the envelope was special presents from friends who wanted to be there but couldn’t (and a few who actually were there)! The lovely Shannon from luvinthemommyhood, Jessica from Running with Scissors, Amy from Naptime Crafters, Anna of Noodlehead, Kate of See Kate Sew, and Shauna of Shwin & Shwin all generously donated ePatterns!

You see, the sewing community can grow rather close – especially for those in the same niche. So to donate ePatterns to an event like this, is just another extension of sharing in the fun! So even though many of these ladies were unable to be in attendance, they were there in spirit! 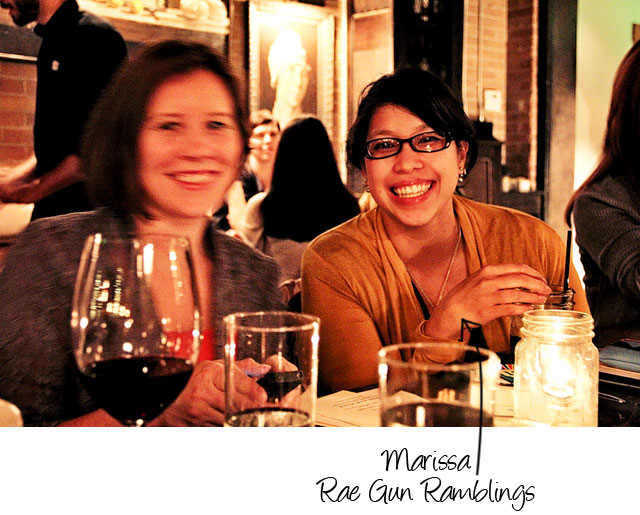 The blurry one? Andrea of The Train to Crazy!

With the dinner in full swing – it really just became a round robin from there. We were initially supposed to have our own little area – but due to inclement weather we were forced inside. But this didn’t stop us, I just found people naturally rotated seats so that they could talk to everyone. And it worked great! We were in the thick of the restaurant, and pretty much took it over! Ha!

We laughed, we smiled, and we ate the most delicious food. 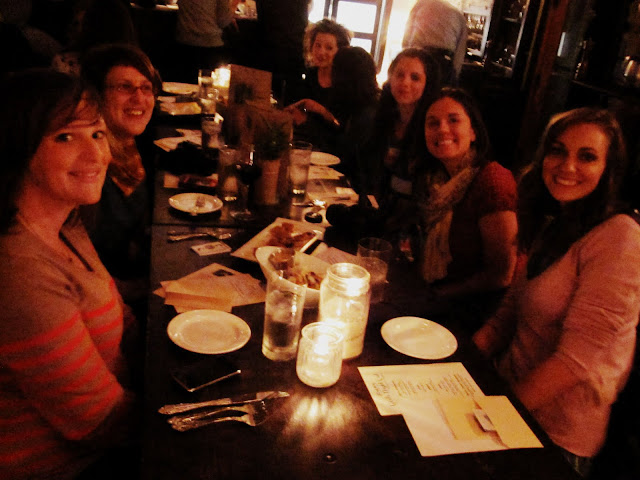 What we did not get was very good pictures. It was a tad dark. And for a bunch of photography loving bloggers such as ourselves, this was hard. But that didn’t stop everyone from getting in on the fun and tweeting / instagraming (verb? I think so) during the event!

We even tweeted out the 3 separate winners throughout the night, which was so much fun.

And for those of you who are curious…here is a picture of liZ and Elizabeth from Simple Simon & Co. 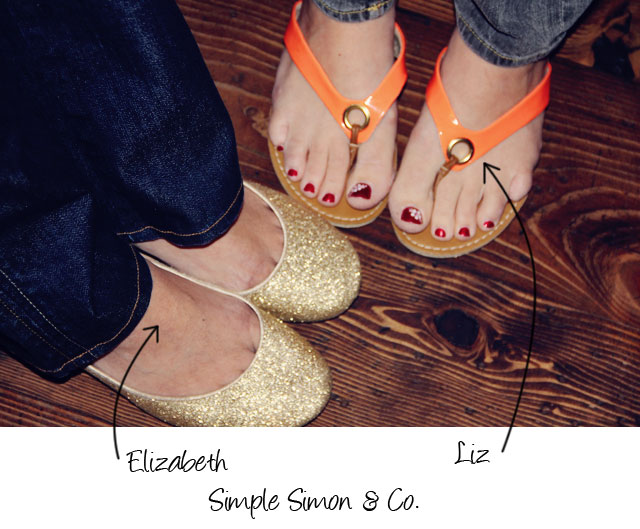 I am such a tease! This was all I was allowed :). But I will tell you they were fabulous, and oh so cute!

It was a great night. Over way too fast, as most things are. I walk away knowing that I have formed stronger relationships with some truly fantastic women. 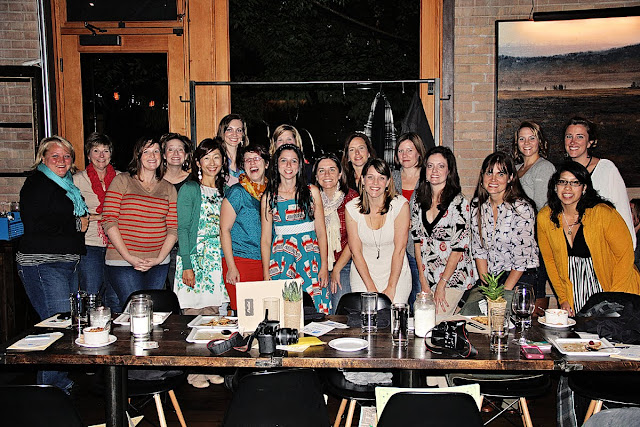 In no particular order – the lovely ladies in attendance were Andrea of the Train to Crazy, Summer of Sumo’s Sweet Stuff, Sabra of Sew a Straight Line, Shauna of Shwin & Shwin, Heather of Feather’s Flights, Sachiko of Tea Rose Home, Rachel of Imagine Gnats, Elizabeth & Liz of Simple Simon & Co., Heather of The Sewing Loft, Lindsay of Craft Buds, Heidi of Honeybear Lane, Veronica of Sew Very, Sara of Sew Sweetness, Marissa of Rae Gun Ramblings, and Lynn & Michele of Coats & Clark.

It was a night to remember – a true Girl’s Night Out.

Thank you so much for stopping by, and until next time…