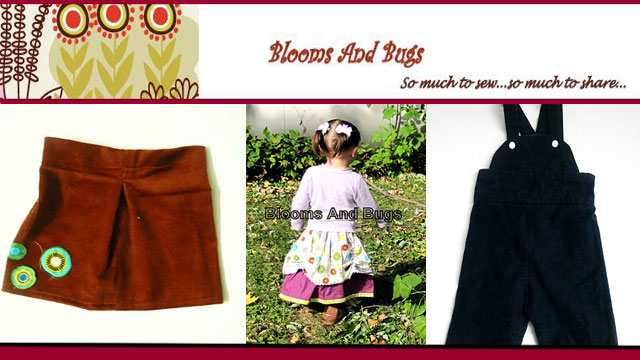 Today I have the honor of introducing Anshu of Blooms and Bugs! When Anshu e-mailed me with her fleece cover up idea, I thought it was fantastic! I am always looking for ways to upcycle old clothing, particularly baby clothing as they grow out of their precious little numbers so quickly.

She has come up with an extremely easy and fantastic way to reuse those old baby buntings!

So without further ado, I turn the floor over to Anshu… 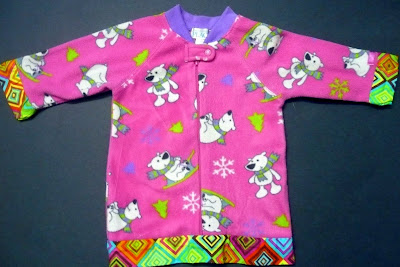 Hello, I’m Anshu from Blooms And Bugs. I (re)started sewing after I was blessed with a little girl almost two years back and could never stop. Early this year I started writing about my sewing adventures at Blooms And Bugs. I also have an etsy shop where I sell little girls clothes. I love Me Sew Crazy and have been following it for many months now so when I noticed that Jessica is accepting guest posts, I couldn’t resist sending my small refashion project for a possible feature. I still can’t believe I’m on Me Sew Crazy…but here I am. 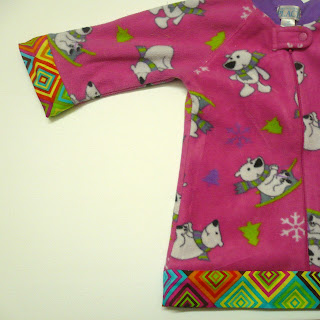 Ever since my daughter started walking her growth has only been vertical. That means clothes that fit well in the waist and body but are a few inches too short. Way too many of them. I found some fleece sleepers that were almost new but were at least two inches short already. Since she needed some jackets for the light California winters, I decided to try and refashion these sleepers into fleece jackets. And what do you know! It was super simple and it worked! Here’s how I did it.

1. Sleeper that fits well in the width but may be too short or too long
2. Fat quarter of coordinating woven fabric 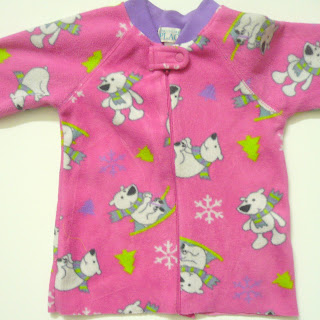 Close the zip up to the top. (This is very important, if you keep the zip open, you may not be able to close it completely after you cut. Don’t ask me how I know that. Just keep that thing shut…ok.) Find the length that you think would be good for the jacket. Cut the sleeper horizontally 1 inch above that length. I chose to cut it right above the legs to get the maximum possible length. The finished jacket comes to my daughter’s thighs, making it longer than the usual but I like that length. If you want a particular length for the jacket make sure you cut accordingly. 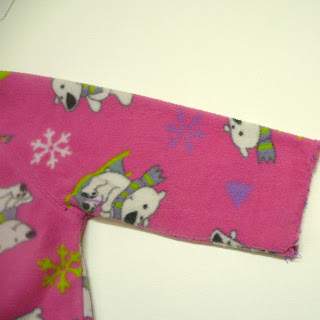 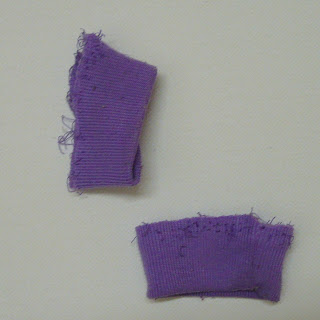 Pick out the cuffs on the sleeves using a seam ripper. This may take a few minutes so be patient. Usually if the sleeper is shorter in length than it is likely shorter at the sleeves too, I’ll show you how to increase the length of sleeves a bit.

Making the ‘Bias Tape’ for hemline and sleeve cuffs

I’m calling it Bias tape but actually it is cut on grain not on the bias. We can get away with this because we will be using it on the straight edges and not curves. However if you would like to use a bias tape that would work too.

Fold the strip you cut earlier in half along the length and iron. 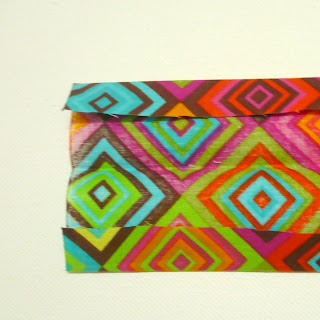 Now fold one edge quarter inch and iron, this may take a few minutes. You may want to make a crease by hand before ironing to make it easy to iron. Quilting weight cottons retain crease well so they’re easier to work with for this project.

Now fold the other raw edge a little less than quarter inch. Folding it lesser will ensure that when we sew this bias tape, it will catch the seam on the inside.
I’ll explain more when we get to sewing it.

In the pic above the top edge is folded lesser than the bottom edge. 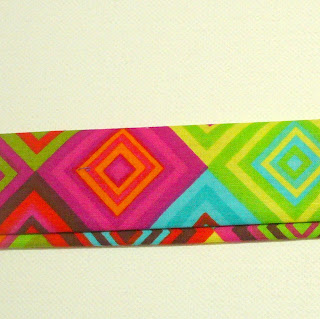 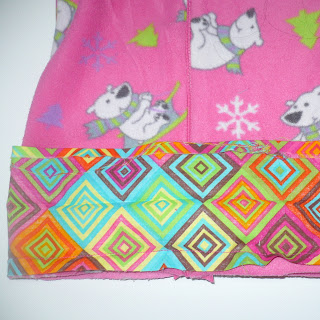 Line up the raw edge that is folded more with the raw hemline of the sleeper ( right sides together). Make sure you leave one inch bias tape unsewn in the beginning. Sew along the hemline. Try to keep the seam on the crease of the fold as shown in the pic above. 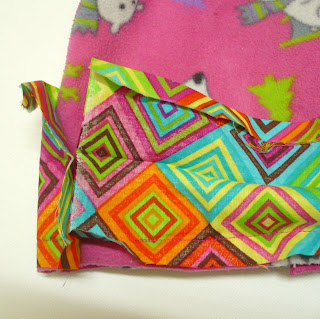 When you get close to the starting point ( within 3 inches), measure the tape you will need to finish it and cut half inch longer bias tape than that. 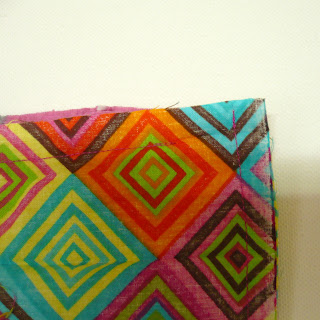 Now line up both the raw ends of bias tape and sew with right sides together. This will ensure a very clean finish. 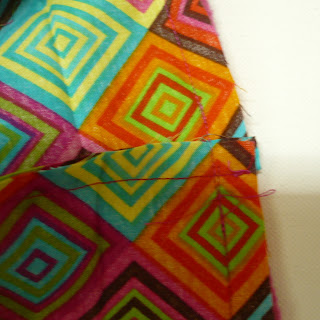 Now finish sewing the remaining of the seam along the hemline. 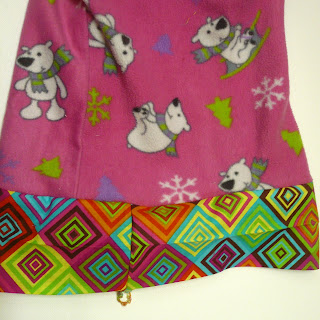 Now fold the bias tape down and fold the part below the center crease inside. 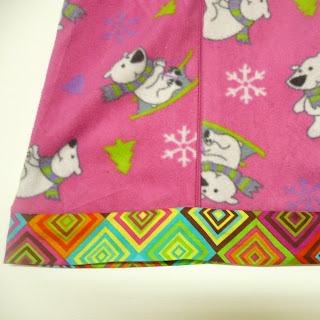 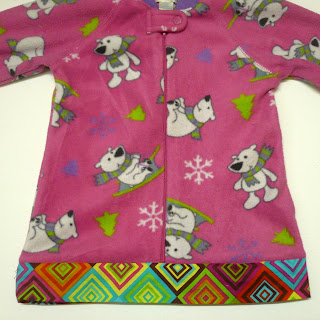 The hemline is ready.

Adding the cuffs on the sleeves: 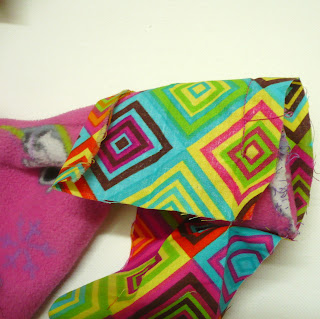 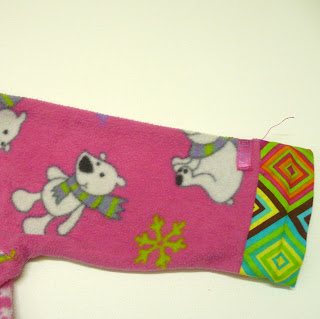 The cuffs are made the exact same way as the bias tape at the hemline. The only thing I need to mention is that you could make the cuffs a different length than the hem, so measure the length of existing sleeves and compare with the length you need and adjust the bias tape width accordingly.

So that’s our easy refashion – A sleeper to a fleece jacket. Sew easy, sew fun! 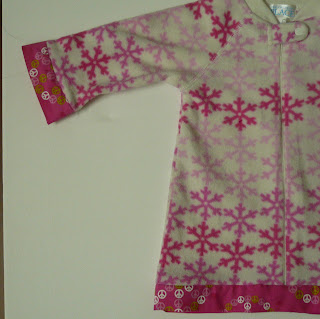 Make one, make many! Enjoy!

Thank you so much for stopping by Anshu and showing off your fantastic upcycle!

Be sure to hop on over to Blooms and Bugs to read more of Anshu’s story, and see all of the fantastic tutorials she shares.

Until next time…Happy Sewing!