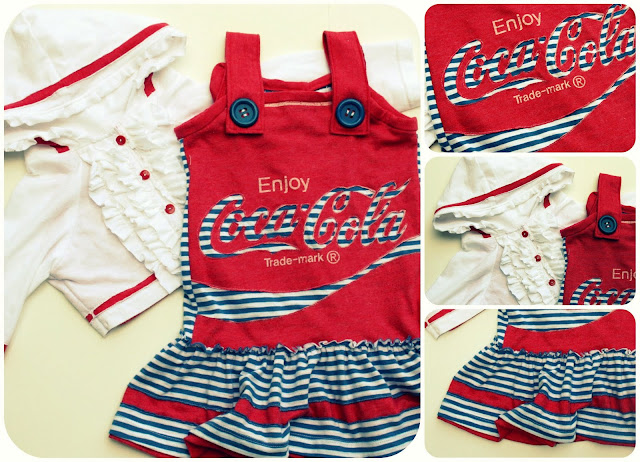 Pattern Remix!!! You know how much I love these!

The challenge was to put our own spin on Lil Blue Boo’s Sienna Dress, which I was super excited about. I have been meaning to purchase one of Ashley’s patterns for a while now, so this had me stoked. Ashley of Lil Blue Boo is such an incredible inspiration to aspiring designers, seamstresses, bloggers, and Stay at Home Mothers, as well as one of last Season’s contestants – so to work with one of her classic patterns in this Series is an honor.

Considering this is a recycled T Shirt dress, and Chloe was used for my inspiration last week, I thought this week I would make something for Madeline. After all, what could be better for your never-sit-still toddler, than a comfortable knit dress?

After falling in love with an old school Coca Cola T Shirt, I knew I had a good jumping off point. And I used the pattern to create this jumper for Madeline… 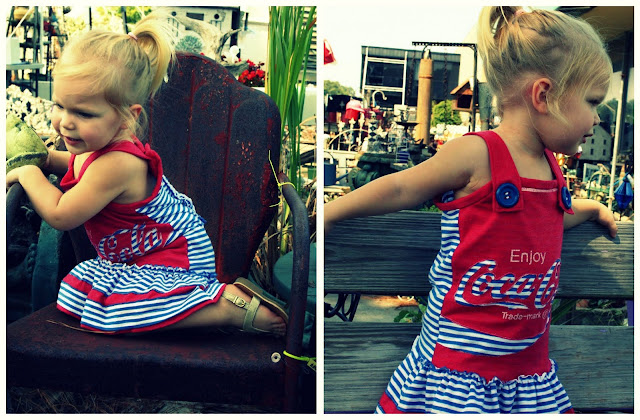 Altering the neckline and sleeves, adding the straps and buttons, while keeping the overall length and body of the dress. I embellished the dress with reverse applique, wanting to try this new-to-me technique. I L-O-V-E the way it came out… 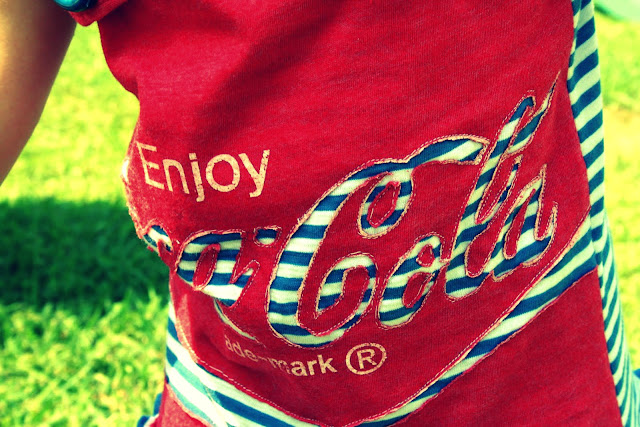 But I didn’t stop with the reverse applique on just the logo, I also used this technique to add the red stripes you see along the bottom of the jumper, as well as the hoodie.

And can we say ruffles??? 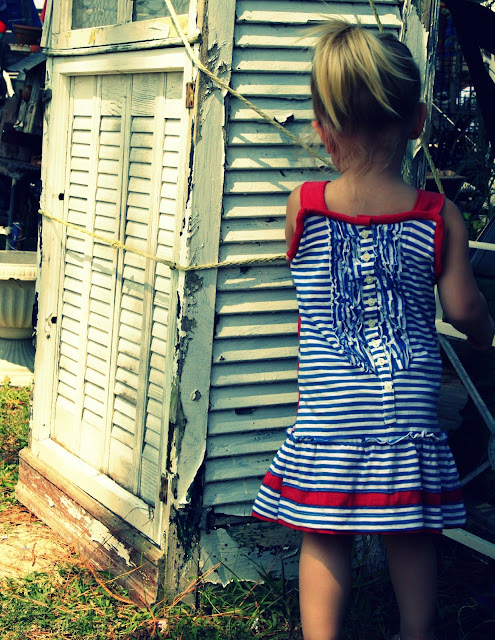 One of the two T Shirts I used for this jumper had a fabulous ruffled button placket going down the front of the shirt. I simply turned that around, using it for the back of the jumper. Then finished the neckline with some of the T Shirt’s knit bias.

I also wanted to add the ruffle along the bottom of the dress, but switched it up just a tad by using an exposed seam along the top.

Next up is the hoodie… 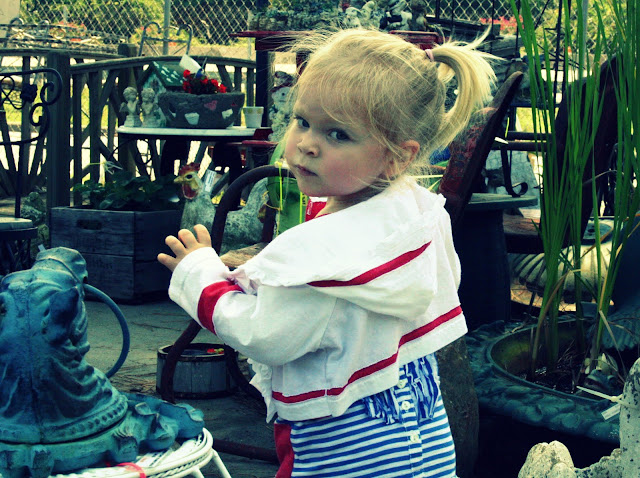 My daughter is obsessed with hoods. It was 95 degrees out, and she insisted on wearing it during this photo shoot! Not only that, but she wants to wear it with the hood up! 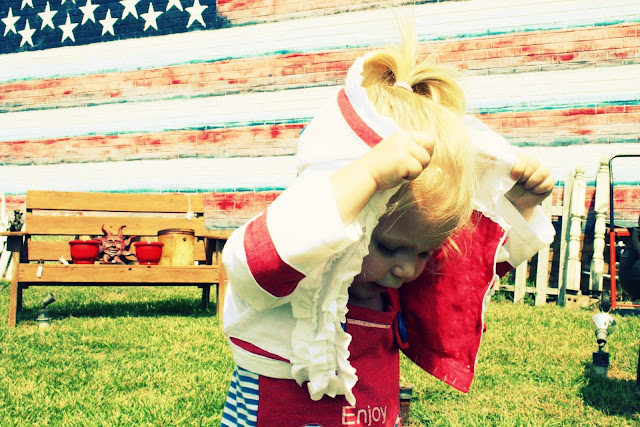 To make this hoodie, I used the same Sienna Dress pattern. I shortened the length of the dress, thereby making it a cropped hoodie for Madeline, and added a hood around the neckline. Lastly, I split the dress up the front by adding the button placket, as well as mimicked the back of the jumper with the ruffled closure. 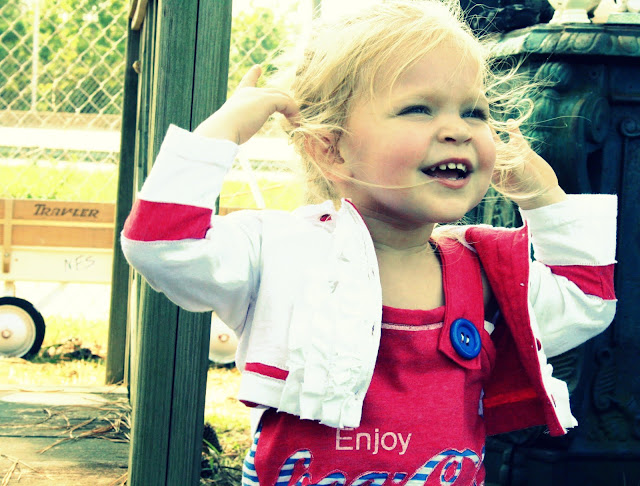 Over all, we love the look. It may be a little bit All American, but hey – we had Labor Day in mind when we were making this.

And what can I say? In our house its ‘always Coca Cola’…lol 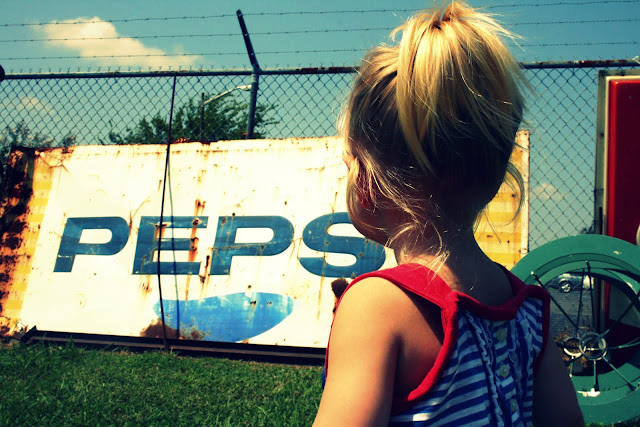 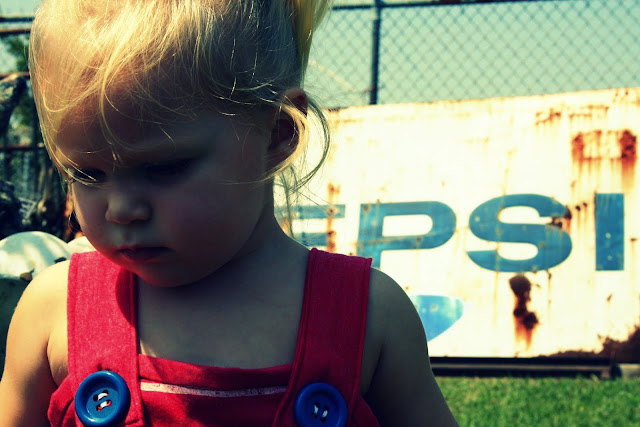 Thanks so much for stopping by, and I do hope you will head on over to Project Run & Play and VOTE!

On another note, I have been asked what patterns I used in last week’s entry. All entries are and will be my own designs, unless otherwise specified. I will be posting tutorials over the next couple of weeks.

As for this week’s Sienna Dress Remix – so long as Ashley gives to go ahead, I can post a tutorial on how I changed this up as well (without giving away her pattern of course).

Thanks so much for stopping by, and until next time…